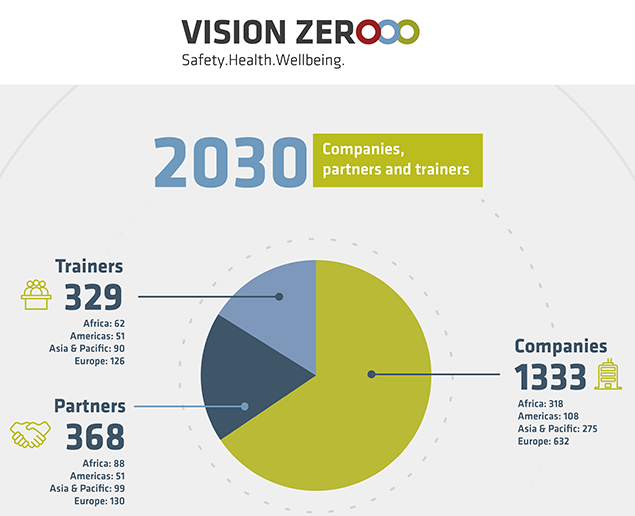 In just 9 months, over 2000 companies, organizations and occupational safety and health (OSH) trainers from across the world have joined the Vision Zero campaign. There is a good spread across all the four regions, being Africa, the Americas, Asia and the Pacific and Europe.

Vision Zero has struck a chord in working life and is spurring enthusiasm around the perspective of a world of work based on safety, health and well-being at work. Launched back in September 2017 at the 21st World Congress on Safety and Health at Work in Singapore, it has since been launched regionally in Asia, Africa, Eurasia, Europe and North America, while national launches have taken place or are being planned in several countries, including Argentina, Nigeria and Ghana. See events.

By June 2018, companies, organizations and occupational safety and health trainers have signed up in support of the campaign. The biggest category is companies, a lot of them small and medium-sized companies that find the 7 Golden Rules of the Vision Zero campaign very useful, but also global companies such as Boeing, Novo Nordisk and Siemens.

There is a good geographical distribution of Vision Zero supporters, and the regional launches in Eurasia (counted in Europe) and Africa in particular, mobilised hundreds of newcomers. More local, regional and national launches will take place in the time to come, and Vision Zero has room for everyone that believes that all accidents, diseases and harm at work are preventable.