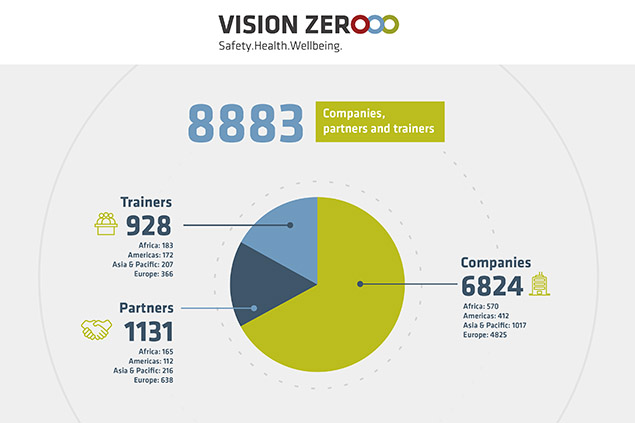 Spurred by several important meetings and events this autumn, the number of Vision Zero supporters is growing faster than ever, from 6300 in September to 7600 in November and reaching almost 9000 by December 2019.

The last few months have been very active for the Vision Zero campaign, and a record number of organizations, companies and occupational safety and health trainers are signing up to promote a world of work based on safety, health and well-being. In November, two key international Vision Zero conferences were organized. The Vision Zero - Innovation in Prevention conference was organized at the A+A trade fair in Düsseldorf, Germany, while the Vision Zero Summit took place in the Finnish capital, Helsinki.

The campaign continues to be very strong and growing fast in Russia, where the Vision Zero campaign featured prominently in the Russia Health and Safety Week, both in 2018 and in 2019. The Vision Zero campaign was first launched at the World Congress on Safety and Health at Work in Singapore in 2017, and will return to the World Congress in Toronto, Canada next year to look at the results so far and the strategy for the coming years.