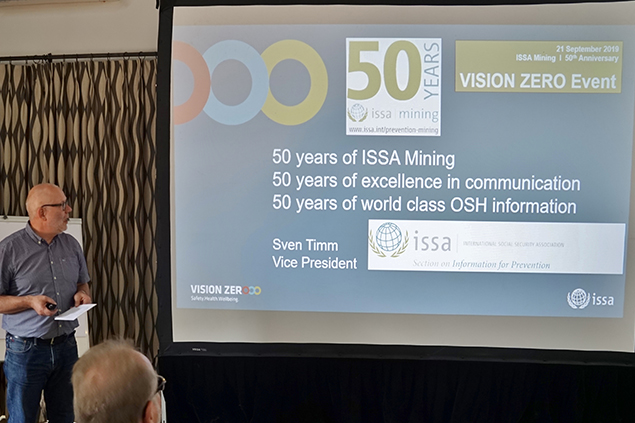 Some 50 participants from 13 countries marked the 50th anniversary of the International Section of the ISSA on Prevention in the Mining Industry (ISSA Mining), during the OSHAfrica 2019 conference in Pretoria, South Africa. The Vision Zero prevention strategy, initiated originally by ISSA Mining, was a key focus for discussion during the event that ran from 18–20 September.

Created in 1969 in the former Czechoslovakia, ISSA Mining was one of the first international prevention sections of the International Social Security Association (ISSA). While the aim was to spotlight ISSA Mining’s achievements over the last 50 years, the event was equally forward looking. In this regard, the discussion addressed Vision Zero, with a number of speakers offering different perspectives from the fields of industry, traffic designers, national authorities and academia. Vision Zero, with its 7 Golden Rules has witnessed strong growth in recent years and is now a successful global campaign.

"When ISSA Mining was established in 1969, the founding fathers could probably not imagine what would happen over the following 50 years. Yet, the core alignment then did not differ from today’s approach: Connect OSH experts across the world, to collect and compare good models of OSH practice, disseminate information and support mining operations to put knowledge into practice", stated ISSA Mining President Ulrich Meesmann during his opening address to the conference. He reminded participants about important milestones achieved since 1969. remarking that ISSA Mining has some 150 members worldwide, and a busy annual agenda of events.

In a video message delivered to the event, ISSA Secretary General Marcelo Abi-Ramia Caetano, summarized the historic development of ISSA Mining since 1969, and drew attention to the “outstanding achievements of 50 years of ISSA mining”. Mr Caetano remarked, “In large part, ISSA’s success in prevention is due to the innovative, conceptual and strategic thinking of the ISSA Mining Section”, and singled out the Vision Zero strategy that has become a global brand.