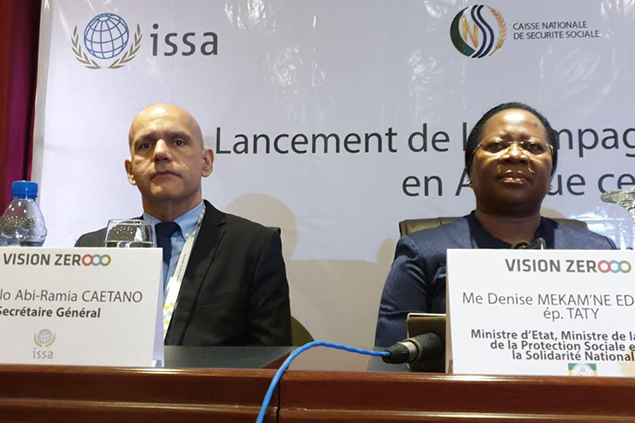 From 10 to 11 April 2019, the Gabon National Social Security Fund hosted the launch of the Vision Zero campaign for the Central African region. Among almost 150 participants were representatives of governments, Central African social security institutions, the Inter-African Organization for the Prevention of Occupational Risks and workers and employees.

The event, presided over by Prime Minister Mr Ali Bongo, was preceded by a training workshop on prevention organized by the International Social Security Association (ISSA). At the official opening, carried out by the Minister of State in charge of social protection, Ms Denise Mekam’Ne Edzidzie, the Secretary General of the ISSA, Mr Marcelo Abi-Ramia Caetano, thanked the authorities and institutions of the country that agreed to hold the event, particularly Dr Nicole Assélé, Managing Director of Gabon’s National Social Security Fund (CNSS).

Vision Zero was then presented by Bernd Treichel, an ISSA expert responsible for prevention issues. He set out in detail the importance of prevention, not only for institutions but above all for the good of workers and the community as a whole. Vision Zero and its seven golden rules are a change of paradigm in prevention and the strategy can easily be adapted to all businesses. Mr Treichel invited employers from the region to become partners in Vision Zero: more than 500 African businesses have already joined the campaign.

At the launch, Gabon presented its new ambassador for the Vision Zero campaign: the international basketball champion Géraldine Yema Robert.

The work was carried out in several stages: